A legacy of empowerment

In 1913, the State of California began requiring a driver's license for the first time.  Though a few states had already adopted the practice, very few required a knowledge or skill test to become licensed.  Also in 1913, a family in Ackerman, Bessarabia, now the Ukraine, gave birth to a baby girl named Anna.

How are these related?  How do they relate to our family and our story?  Though living through the implementation of the car as a staple of modern society, the model T was in production until she was 14, Anna never owned a license nor drove a car.  When she and her three year old girl, Margaret, came to the United States in 1956, 2 years after Ellis Island closed, they made their new lives in America without adopting its growing obsession with automobiles.

Anna grew up in the Ukraine and studied Art(paint in Oils) in Munich, Germany and was promised a job painting in the United States when she arrived in Gettysburg, Ohio.  But, she found that her fine brushes would not be needed to paint houses.  Years later, she moved to a small flat in Columbus, Ohio, where she would continue to live and work as her daughter went through school.

It was during her time in Columbus that she purchased her three wheel bike.  One long time resident recalled seeing her riding along the freeway one day.  Anna had rented a small community garden plot and, according to her daughter, it simply made more sense to take the faster route.

Her daughter grew up, graduated from Ohio State and moved out west, Anna stayed in Columbus and continued her simple life.  When the garden became too far away, she cultivated life in and around her own home, caring for the things that grew, and living as a steward of our Earth. 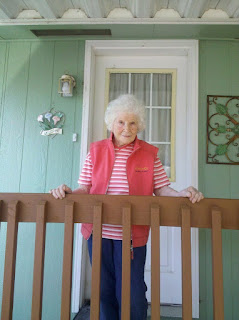 As time wore on, she moved out to Boise, Idaho, to be near her daughter and grandson, and her bicycle and greenthumb came with her.  Anna rented out a small home and with the help of her family, created a small, flourishing garden.  Her grandson vividly recalls being left alone to wander the garden, eating strawberries, picking raspberries, or finding the biggest tomato to cart into the kitchen as his prize produce.

Time continued forward and the bicycle became more difficult to ride, many of the adaptive bicycles were still early in development, so walking became her primary means of transportation.  At 86 she was struck in a crosswalk when a private delivery truck made a right turn and didn't see her.  A life of living without relying on cars, nearly ended by one.  She survived, but with greatly reduced mobility.  She moved once again, in 2008, this time to Eugene, Oregon, so that her daughter and grandson could be present with her and help her keep her independence.  Though unable to bike and not as spry as before, Anna continued to live on her own in a small manufactured home.

The lack of a car had kept her life in perspective, had kept her daily tasks small and allowed for enjoyment of all the small details we miss everyday.  The faster we go, the more we try to pack into the day, and eventually we forget how beautiful hummingbirds are(they would visit her garden in Boise regularly).

She died March 5th, 2019 at the age of 105, having given her love to the youngest generation of her family, her four great-grandchildren, and their father and mother.   Earlier I asked how this relates to our family and our story.  For that I leave you this, CARDAG and Omama, Anna Mitschu Nikolajewitch. 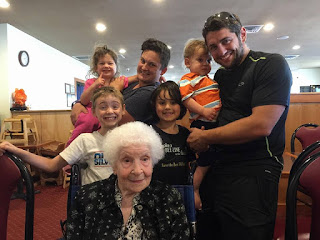